Munya Safe As The Rest Are Up for Eviction
Monday, September 20 2010 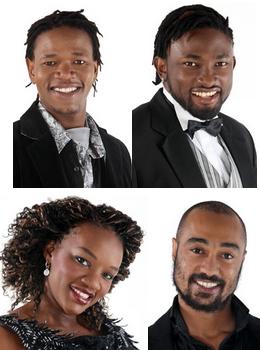 The game is becoming tight by the day and though one barnmate (Lerato) is not allowed to nominate for obvious reasons, it did not help the situation either as four housemates are up for eviction the first time in the Big Brother All Stars.

Munya who is the current head of house was among those who scored the highest in nominations this evening but he saved himself and put Meryl who had survived the nominations. This means that all the housemates are up for eviction apart from the head of house, Munya from Zimbabwe.

Kaone is 'Finished'
This week is equally very predictable as Kaone is leaving the house next Sunday. He is the only one among the male housemates who has not faced Africa compared to Uti and Mwisho who faced Africa and bounced back to the house.

The only female in the house
Meryl so far is riding on two or three aspects: Being the only female standing in the main house gives her an edge in the game, Girlfriend to Mwisho which acts as a precursor to steamy moments in the house which has been one of those crowd puller products after shower hour was scrapped.

That means Meryl is not leaving, Uti happens to be stronger than Mwisho and Mwisho is stronger than Kaone given his affair with Meryl. This leaves Kaone standing on the Botswana vote which might also not be enough to save him.

Next week will even be more interesting as it will be between Munya who has gained a lot of 'Africa Muscle', followed by Uti and now the pair(Merylsho) which is going to be split in the next week. This however, strongly depends on who wins the head of the house task. Keep it locked to Uganda Online for more!
Posted by: uowd AT 10:24 pm   |  Permalink   |  Email
Tweet
Uganda Online Entertainment News