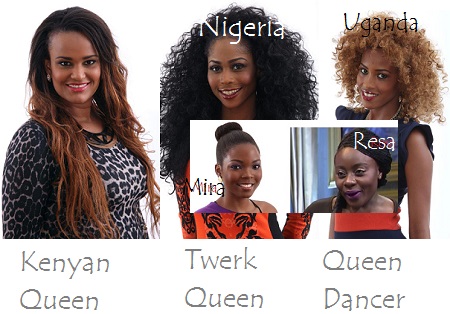 Housemates are equally worried that the house is running short of girls. Africa is very clear with what they want and what they don't want. Esther was evicted for what she does best, being a 'master @ bet' which broke her bed in the process. Twe#king has not helped Nigeria's Lillian either, it just caused her more problems.

Sabina has an eight month old baby, so Africa just found it fair to relieve her from the game so that she goes and attends to her baby. In one of her diary sessions, it was clear she was missing her baby who was left under the care of a maid, and from the message she sent out to the maid, Africa was left with no choice but to set her free after 14 days as opposed to the 63 days.

Mira's getting on to the Big Brother game just 5 days into the house was certainly not a good example to the majority of the viewers. Mira and Luis got it on, so there was no way Africa could spare her in the house for the next few weeks, she could end up feasting on all the boys in the house.

In this game, the one with least votes packs their bags and that is exactly what happened with Resa from Zambia. Meanwhile, our Ellah should count herself lucky, she survived by a whisker bearing in mind that not even Kenya's vote was enough to save Sabina, she was evicted and yet Kenya voted for her.

Just as well, Ellah  got only one vote and it was from Uganda, but she managed to survive at least crossing to week three, a period longer than Denzel and LK4 spent in the house.

Sabina, Lilian and Esther were evicted as per the tie-breaker rules