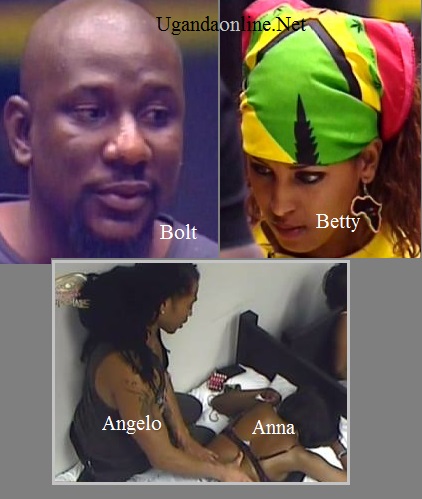 Africa is about to witness the first love fight in the Big Brother house between Kenya's fashion designer, Annabel and Ethiopia's Betty. Apparently, Annabel is getting close to Bolt something that is not going down well with Betty to the extent that, the couple had to sleep on separate beds last night which seemed unsual.

It all started last night when South Africa's Angelo(36) went to Annabel, who was by then lying on her tummy, took off her top and gave her a long back massage. This went on for quite sometime as Anna was enjoying every moment as it lasted. The rastaman from South Africa was done but Annabel still needed more of the treat.

This is when she opted for Bolt who did not dissapoint in giving her exactly what she wanted. Annabel enjoyed the good run from Bolt but as this was going on, a lot of anger was building up with Betty much as she did not say a word. They all later settled for separate beds which looked rather strange for the lovey dovey couple.

Elikem from Ghana brought some life into Betty when he tip toed to her bed and told of how he had been disqualified from the game. This sent shock waves to her but moments later, Elikem told her that he was only kidding. This is when she left her bed and dashed to Bolt's bed before the two started feasting on each other's saliva.