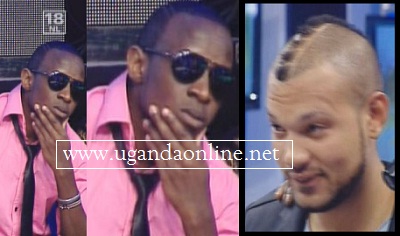 Uganda's Kyle was among the six finalists in the just concluded Big Brother Africa StarGame making him a winner in his own way bearing in mind that many did not believe that the Ugandan couple could even go past the first week.

Uganda has been represented right from the very first day when Flavia Tumusiime was a host on the show that launched the Big Brother StarGame with IK. Kyle and Jannette were the only couple left in the house after the rest were split.

Jannette aka the little princess from Uganda was again the last housemate to leave the house before they came up with a line up of finalists again making Uganda proud. Kyle survived three evictions to get to day 91.

On stage IK asked him what trick he had used to keep in the house for that long, he said: "I was just being myself" IK then asked him about what happened to showing his dude to Africa, he said that the camera scared him.

Kyle was able to trounce Wati from Malawi but Talia who has a share of the money through her love connections with Keagan, Kenya's Prezzo and Lady May were not easy for him to download.

Jannette was counting on a share of the win had Kyle won now that he had promised to give her some of it but all these plans have been quashed.