Zainab Determined to Get Keitta Before Eviction
Friday, May 18 2012 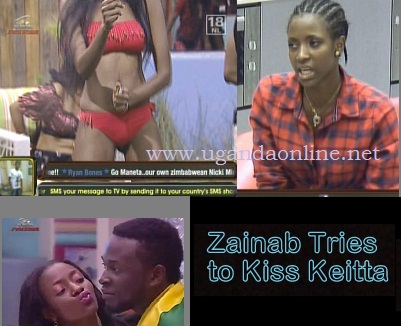 When they called for participants to join the Big Brother show as pairs Keitta and Mildred from Ghana responded as a couple and were able to meet the expectations of the judges. The rest of the participants came in as buddies, brothers and sisters.

It has kind of not been easy for the couple to express their feelings openly before the other housemates and if this show does not break them, then it will only make them stronger. On the other hand, Zainab from Sierra Leone dreams of having Keitta's surname and she is more than determined to get his heart.

Zainab timed Keitta in the kitchen on Wednesday and wanted to kiss his lips but Keitta simply put his chic. Zainab asked what his surname was and Keitta replied that he was 'Osei' Zainab declared that she will one day be called Zainab Osei. This was however brushed off by Mildred.

Yesterday was worse. Mildred was sleeping off as Uganda's Jannette and Zainab tried to give Keitta company. Zainab was in a very short skirt with nothing under that left everything to the full display of Keitta more so with legs wide open.

Mildred woke up and noticed that the situation around Keitta was so scary by her standards. On realising that Mildred had woken up, Zainab tried to cover up. It's not clear whether Zainab will leave to see her dream in the Downville house now that she is up for possible eviction.

The good news is, Zainab is likely to cross to the Upville house and encroach on Maneta who is now the queen of the Upville house. To confirm this Maneta was having a massage from top admirer and fellow countrymate Rocki as Mampi looked on with envy.