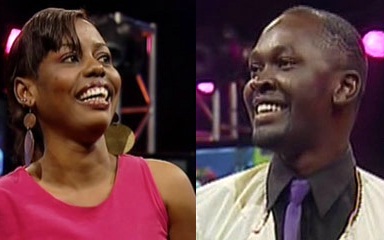 Uganda's housemate and and the Tanzanian housemate who were 'lovers' in the house have been evicted from the Big Brother house after 34. This marks the end of Tanzania in the Big Brother game after Lotus was disqualified and leaves Uganda with only Sharon O.

Luclay from South Africa only came to learn of his replacement with Miss P during the live show but he kept on saying that I decline I decline...implying that he wanted to face Africa and probably be out after the show.

Bhoke who got 2 votes (Tanzania and Zambia) was called out first from the house and IK asked her about the Ebhoke relationship as to whether it was real. Bhoke replied, "No not really I don't think so I wasn't playing the game it was real."

IK crossed to the house to announce the name of the second housemate to leave the house and our boy Ernest was called out of the house marking the end of Uganda's only hope in the game now that Sharon is too quiet for life.

Clad in his 'Kanzu' Ernest came on stage with Grace Nakimera's track playing in the background. IK asked him how he felt about leaving the house and his reply was, "This is a once in a lifetime experience, It's amazing, this is it" IK told him to be careful because that is exactly what Michael said before he left.

It was purely a Uganda moment because as they showed him his highlights in the house, Maurice Kirya's 'Boda Boda' track was playing along. Moze Radio, Weasel and Keko thrilled the amplified stage together with Amplified Crew.

Ernest at least knew Karen and Luclay had nominated him though he was surprised that Nic from Kenya and Alex had nominated him. Mumba, Danny were the other housemates who cost our boy the USD 200,000.

He blew a fuse to one of the housemate and that had to be none other than Nic. "Like seriously I did not see this coming how the hell do you nominate me, I love you no I don't." Ernest charged as he left the stage.

Meanwhile, these two lovers(Bhoke and Ernest) have been evicted from the house on the same day and now they are in an environment without Biggie's voice, Camera's, microphones we wonder what tonight will be for them.