Tanzania's Bhoke Opens Up to Uganda's Ernest
Wednesday, May 18 2011 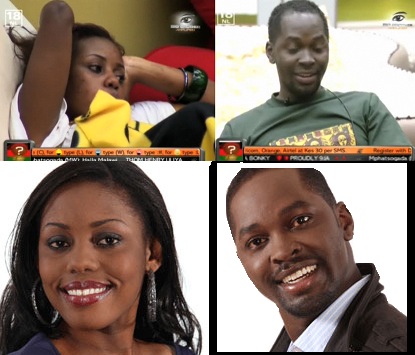 Monday Night was a night that was dedicated to Ernest and Bhoke as they opened up to each other on topics ranging from  family to sex lives among others. Bhoke was clad in a white top only plus a light material that she used to wrap around herself with her legs facing Ernest.

The Ugandan housemate engaged the Tanzanian housemate on several issues. He first asked her about her room in Tz which she said was big though empty with most items in the living room.

Ernest went a little close by asking Bhoke if she invites visitors most especially male visitors at her home. The Tanzanian TV presenter said yes, and Ernest was wondering if these 'male' visitors spend a night when they visit.

I'm Loud
The Tanzanian housemate said they cannot spend a night now that she stays with her mum. She also told Ernest of how she is loud reminding me of Millicent who assured Michael not to joke with East African girls for they will make him forget about his women from Mozambique because they are lethal in bed.

As the opening up progressed with Ernest listening attentively while taking his beer, Bhoke told him of how she lost a child, how her parents separated and do not even say hi to each other. She even told of how her mum is about to move to a bigger house which is about to be completed.

Ernest on the other hand told her of how he was going to change the way he was conducting himself on the issue of women. First he told her that he normally uses protection but when things are compromised, then he removes the protection.

Bhoke was a bit confused because it was like the man she was trying to open up to is kind of a womanizer and one who goes without protection. Anyway she told him to be careful but Ernest said he just does not bang anything with a skirt.

He has a checklist of the things he considers in a girl so by the time he is with a girl, then that is the right person. Kim who had been worried the whole evening because she had been nominated made her way to the 'ladies' and on coming back, they asked that she joins them. Time check was 2:00am and the ladies were now engaging Ernest.

They later retired to bed together though we are yet to establish if something went down. However, judging from what happened on Tuesday morning which Biggie is terming  as lovers' Tiff, Ernest laughed at Bhoke.

She was not amused with the move, so she asked him why he was laughing, Ernest told her that he was not laughing at her but at the fact that she had kicked the exercise instructor in the mid-area. Even after that explanation, she was not impressed, but we will continue monitoring the situation and get back to you with the updates as they unfold. Watch this space!