Liberia's Luke was evicted last Sunday but realizing that he was up for eviction he knew that his chances of remaining in Biggie's house had dwindled. The guy who cried like a baby when Ola and Chris opted out of the game used every minute in the house tactfully.

It's not clear what happened to Luke but within two minutes, the guy was done. Jessica did not waste anytime but just got to the drivers seat and tried sorting herself out but wapi the guy was done.

It was 17 days into the show that even the first official couple to get into the house has not yet thought about what these strangers had just served themselves with before the watchful eyes of Africa. 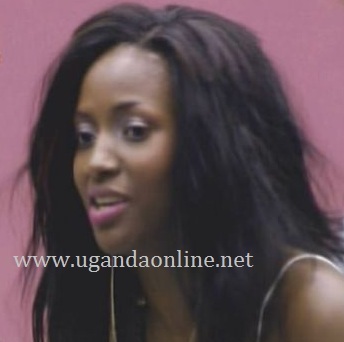 Sierra Leone Zainab emerged the best in last week nominated housemates with 13 votes while her fellow country mate Dalphin got no votes. Luke who led fellow housemates in a prayer to keep them together got one vote and so was Yadel with one vote too.

As we predicted that Zainab will cross to the Upville and the rest sent packing was exactly what happened during the Sunday live eviction show. The Downville house will enjoy Biggi'e house with no eviction pressure as the hit crosses to the Upville house.

It means that the Ugandan housemates are safe for the third week as the random machine is on holiday this week. Zainab who has just crossed to the Upville house will not be nominated.

The random nomination machine does not  apply to the Upville house, the VIP's will have to nominate each other the traditional way. The honeymoon is over for the VIP's and now the game begins. Can't wait to see how the DKB, Prezzo beef works out in the nominations.
Related: Saturday Night Party in the Upville House
Sierra Leone, Liberia

Liberia and Kenya have come up with an alliance of sorts which is very vital when it comes to matters of voting. This means that should these be up fro eviction, they automatically win themselves a vote from a 'lovers' country.

In the picture, you can clearly see Yadel and Alex exchanging a lovely expression which certainly keeps the fans glued on what happens there after. Other couples trying to come up are Jannette and Wati though they've not been on the good side of the camera, Junia and Ola, though Junia requires to stand on a chair to catch up with Ola's height.

There is still more action packed series with Downville house still left with 24 housemates and the Upville now with 8 after being joined by Zimbabwe's Maneta in the eviction that marked the end of Tanzania n the Big Brother Stargame.

Teclar from Zimbabwe was the other partner with Maneta who got booted from the house after she failed to score the required points. She left the house crying like a baby.

The Big Brother Stargame is on and week two has kicked off with three already out of the house just after seven days. Housemates in the Downville house are playing the game as two implying that in case of nominations, a ball that is selected randomly by the machine represents the two housemates from that country.

During the Sunday live show, It was revealed that Maneta from Zimbabwe emerged the winner with 8 votes, followed by Hilda with 6 votes and one vote for Julio and zero for Teclar. Having beaten those up for eviction, Maneta now joins the Upville game making it two housemates from Zimbabwe with Rocki in the run for the top prize.

Zainab fought yesterday with Seydou from Angola abused him terribly after throwing a glass at him something that forced Biggie to ban booze in the Downville house, Yadel has already slept in Malonza's bed but still not so sure what role that kind of CV will play in their bid to the top prize.

Vote for the housemate you want to stay in the house